Panelists testified before a House subcommitte panel on Tuesday, calling The Equal Employment Opportunity Commission’s (EEOC) 2012 guidance on an employer’s use of criminal background checks an example of administrative overreach

Rep. Tim Walberg, Chairman of the House Subcommittee on Workforce Protections, said the EEOC’s guidance is “flawed” and criticized the agency for denying the public the opportunity to comment on the guidance before it was issued two years ago.

Witness Todd McCracken, President of the National Small Business Association, explained that small businesses, which often do not have dedicated human resources personnel, are particularly vulnerable to EEOC lawsuits based on criminal background screening.  He said that employers can still be held liable for negligent hiring claims if they comply with the EEOC guidance. He also made the point that-because there is no safe harbor in the EEOC's guidance protecting employers that follow local or state government hiring laws- small businesses face an increased chance of liability exposure.

McCracken noted that the EEOC guidance is 55 pages long with 157 footnotes, which makes compliance especially difficult, and creates incentives for small businesses to contract out the hiring functions instead of hiring additional employees to accomplish this end, thereby undercutting the EEOC’s goal of promoting employment.

Similarly, compliance with the EEOC criminal background check guidance wouldn't shield an employer from tort liability for negligent hiring or worse if it hires an applicant with a past conviction who subsequently harms customers, co-workers or the public, McCracken said.

The EEOC should provide employers with a safe harbor when a “direct conflict” exists between the EEOC guidance and state law requirements, McCracken said.

The subcommittee also heard from Lucia Bone, whose sister was raped and murdered by a twice-convicted sex offender who had worked in her home for a duct cleaning subcontractor. Lucia Bone founded Sue Weaver C.A.U.S.E. to push for more stringent background checks in employment. She said criminal checks can save lives and reduce tragedies, that it is an appropriate risk tool, and the EEOC should suspend guidance, as all views need to be heard. She says the current guidance puts innocent people in jeopardy.

If the two companies involved had conducted a criminal background check, her sister “might still be alive today,” Bone told the subcommittee.

But Sherilynn Ifill, representing the NAACP Legal Defense and Educational Fund Inc. in New York, stated the EEOC is an instrument to create equal opportunities. Ifill went on to say the EEOC guidance does not prohibit use of background checks, but just gives guidance in how to use them, and the U.S. needs to re-think the criminal re-entry system. 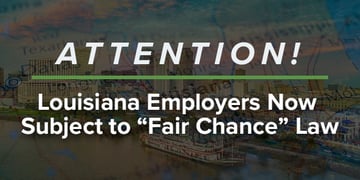